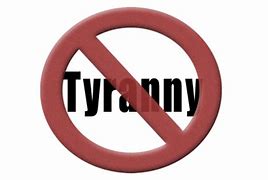 Matthew 7:12
“So whatever you wish that others would do to you, do also to them, for this is the Law and the Prophets.”

Galatians 2:4-5
“Yet because of false brothers secretly brought in—who slipped in to spy out our freedom that we have in Christ Jesus, so that they might bring us into slavery— to them we did not yield in submission even for a moment, so that the truth of the gospel might be preserved for you” (italics mine).

I have been saying recently on my various social media venues that I deplore tyranny in any form. Not only physical tyranny, certainly. But also, political, religious, and intellectual tyranny as well.

But that begs the question. What is tyranny? Well, since I am blessed to live in a country that values liberty, I thought I’d quote one of the Founding Fathers of our nation, Thomas Jefferson. Surely, as one of the men who (rightly or wrongly) resisted British oppression, he has defined tyranny for us. Not so! There is a quote out there in cyberland that is attributed to him, but I understand that to be a spurious quote. However, Jefferson did define liberty – and he mentions tyranny in this definition as well. So, let’s start there.

Thomas Jefferson described the term liberty in the Declaration of Independence as “unobstructed action according to our will within limits drawn around us by the equal rights of others. I do not add ‘within the limits of the law’ because law is often but the tyrant’s will, and always so when it violates the rights of the individual” (italics mine).

I think this is a good definition of liberty as it reminds us that, as we exercise our own rights, we are to live responsibly and act in such a way as to uphold the rights others (basically, the Golden Rule, which Jesus also affirmed). It is, at least, a good definition for a citizen of the United States like myself (and this happens to be the country I live in and the Declaration of Independence is, in fact, a foundational document of this country). I suppose if one doesn’t like or agree with this definition, she or he is free to live elsewhere; there are plenty of countries which do not agree with Jefferson’s sentiment. I mean, only if one really doesn’t agree with it. Why would someone want to continue supporting a country they don’t like? (It’s like being in Heaven or hell. People often ask, “How could a loving God send anyone to hell?” Well, the real question is, “Why would a loving God make you stay in Heaven with him when you don’t want to be there?” So, why would one want to stay in a country he or she fundamentally disagrees with? (Same principle – except the Heaven and hell question is infinitely the more important question to answer for yourself. In my opinion.)

So much for the public square! The theological reason I say this is because I believe that all people are created in the image and likeness of God (Genesis 1:26). Along those lines, I also believe that God is never coercive, but is always persuasive. That is, God doesn’t push his will on us so who am I – or any other human being for that matter – to exert my will onto someone else? Yes, indeed, I do try to persuade people to see and accept my perspective (if I think it is important enough to do so – and, no, not all of our perspectives fall into this “categorical imperative” so to speak).

Jesus is actually only one of the few historical figures who never tyrannized in return for being tyrannized (indeed, he probably set the stage for such a peaceful reaction).

Tyranny, unfortunately, is especially poignant when it comes to religion and the state.

Mohammed was persecuted by the Arabs of Mecca before he, in turn, tyrannized them through conversion by the sword.

The so-called followers of Jesus aren’t off the hook either. Free-thinking and Gospel-centered Christians faced their tyrants in the form of the Inquisitors. Martin Luther, the key Protestant Reformer, who was hounded by the Roman Catholic Church, in turn, hounded the Anabaptists. Puritans fled England to escape their tyrant in the form of the Church of England. The Puritans, in turn, became tyrants themselves (ask the witches of Salem).

Nonetheless, it is not the Church, the virgin Bride of Christ, herself that is a tyrant. It is when the “church” whores itself with the state and its power of the sword that it becomes a tyrant (Revelation 17:1-6).

To finish up this blog entry, allow me to quote myself from an earlier Facebook post I wrote:

I see that some folks don’t tolerate other people’s perspective on issues or ideas. This can concern secular ideas and even religious ideas. There seems to be no room for questioning or for challenging one’s own views. That is sad. It shows a certain amount of immaturity, to be sure, and also a lot of intolerance.

This stubbornness in one’s own opinions – and they are only opinions after all – I have found comes from both self-identifying conservatives and progressives. (And, who said that those two groups have nothing in common?!)

But, one thing I will not do is coerce someone to see my point of view. I despise tyranny in any form. I will not use ad hominem attacks against them; I will not malign their character; I will not smear their reputation; and I will not call into question their faith (if they have a faith)….

It’s also the non-tyrannical thing to do.

So, do you have truth claims you wish everyone would embrace? Do you think your truth claims would better the world – and the people in it? (I make such truth claims. They are mostly about Jesus and the necessity of having a relationship with him.) If you have such convictions, then use the power of persuasion to get folks on board with you. Appeal, beg, and plead if you want to. But, don’t ever coerce.

And, certainly, never use the power of the state or religion to force people to comply. Now that is certainly tyranny.

In keeping in step with Thomas Jefferson, here’s a quote from Walter E. Williams, “Keep in mind that one does not have to be in favor of death camps or wars of conquest to be a tyrant. The only requirement is that one must believe in the primacy of the state over individual rights.”

PEACE be with you.