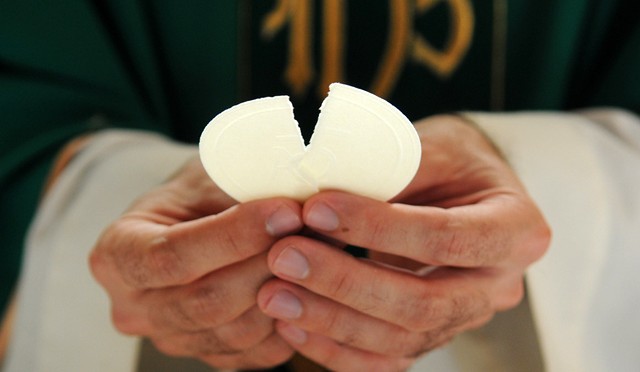 “Now as they were eating, Jesus took bread, and after blessing it broke it and gave it to the disciples, and said, ‘Take, eat; this is my body.’”
– Jesus the Messiah, God incarnate, Matthew 26:26.

“For I received from the Lord what I also delivered to you, that the Lord Jesus on the night when he was betrayed took bread, and when he had given thanks, he broke it, and said, ‘This is my body which is for you. Do this in remembrance of me.’ In the same way also the cup, after supper, saying, ‘This cup is the new covenant in my blood. Do this, as often as you drink it, in remembrance of me.’ For as often as you eat this bread and drink the cup, you proclaim the Lord’s death until he comes. Whoever, therefore, eats the bread or drinks the cup of the Lord in an unworthy manner will be guilty of profaning the body and blood of the Lord.“
– St. Paul, 1 Corinthians 11:23-27.

“This food we call the Eucharist, of which no one is allowed to partake except one who believes that the things we teach are true, and has received the washing for forgiveness of sins and for rebirth, and who lives as Christ handed down to us. For we do not receive these things as common bread or common drink; but as Jesus Christ our Savior being incarnate by God’s Word took flesh and blood for our salvation, so also we have been taught that the food consecrated by the Word of prayer which comes from him, from which our flesh and blood are nourished by transformation, is the flesh and blood of that incarnate Jesus.”
– St. Justin Martyr, “First Apology”, Ch. 66, inter A.D. 148-155.

A friend of mine who is my oldest son’s awesome youth pastor, Jason Fredregill, texted me today with an article he had read wanting to know what I thought about it (like my opinion matters much; but I do appreciate that he asked me). Well, instead of a short and sweet answer, I, of course, had to answer it in a few paragraphs. Which, then, I thought, “I might as well turn this into a blog post.” At any rate, thanks for the question, Jason, because you definitely got me thinking! And, it’s always a good thing for people to think!

I think the author, Carl Trueman, of the First Things article, “The Protestant Apocalypse?” brought up issues that I actually do believe plague the 21st Protestant church, especially in its Evangelical instantiation. I pick out the evangelical sect of the Church, not because it is the only segment of Christianity that is affected with such phenomena, but because of all the Protestant movements, it is the one with which I have the most personal experience and can testify that this is true within evangelicalism; again, at least, the evangelicalism that I have known.

To be honest, for these reasons, which I will presently discuss, and others, I really no longer consider myself an “evangelical” in the sense of the 20th century-ish movement following after the fundamentalists controversies. (Of course, the Evangelical Movement proper began in the 1730’s and 40’s with the out breaking of the First Great Awakening. I am simply limiting to the debates that happened between the Fundamentalists and the Evangelicals over a few issues, but especially over the concept of “separation” from denominations that didn’t stick with the “fundamentals of the faith” the way the Fundamentalists thought they should). Of course, I am evangelical in that I believe that the Bible is the inspired Word of God and that people are called into a personal (what other kind is there?) relationship with Jesus Christ.

Actually, I do consider myself Protestant in the sense that I do not officially associate myself as a Roman Catholic or an Eastern Orthodox Christian (even though I was chrismated as an Orthodox Christian at Christmas in 2008 with my family and still have a faith that is influenced by that experience). I wish it was good enough to just say I’m simply “Christian.” But, that too has its nuances. I mean, I’m certainly not a Christian in the sense that Mormons, Jehovah’s Witnesses, or even the Unitarians say that they are Christians. So, perhaps, “Christian” isn’t enough. If I had to choose a designation, I guess I’d prefer “Nicene Christian.” Or, “orthodox Christian.” Maybe, for the heck of it, I’ll just be historically accurate and call myself a “catholic Christian.” That’s what, I think, the best iteration of the Anglican Church means when it calls itself “catholic.” The Catholic Church is the one mentioned in the creeds as the “one, holy, catholic, and apostolic Church.” I guess that would mean the Church in its unity before the 1054 AD (“great”) schism – leaving alone the fact that there was a pretty major rift in the Church after the Council of Chalcedon in 451 over the concept of the hypostatic union of Christ. But, that’s just splitting hairs, right?

That’s why I “proudly” claim to be an Anglo-Catholic and why I am a member of the Orthodox Anglican Church. But, that’s really neither here nor there.

So, with those terms very briefly and broadly defined, yes, I think Trueman’s analysis is spot on. And, in many ways, I think the heart of the issue goes back to an understanding of the sacraments of the Church, particularly Holy Communion. If the main part of a worship service is the sermon (the “preached Word of God”), then it really doesn’t matter if one is listening to the sermon in person, in communion with each other, or whether one does so in the comfort of one’s home via Zoom. Only the ears and the heart are required. But, if Holy Communion is the apex of the worship experience, then that necessarily requires, at least, a mouth to be present at church. Nonetheless, I think there is more to it than a mouth. After all, the definition of “coming together” is, in fact, “communion.” That is precisely one of the names for the Holiest of Sacraments.

But, in Evangelicalism, I don’t think there is a doubt that Word takes precedence over Sacrament. That is why a sermon can be up to 30 or 40 minutes long often repeating the same themes over and over again, and why Holy Communion is, at best, celebrated once a month.

That’s another reason why I am an Anglo-Catholic Protestant. At least in the Anglican Tradition (again, at its best), the emphasis has always been on Word AND Sacrament.

But, why all of this emphasis on Holy Communion? Isn’t that just vain, meaningless ritualism? Ah, that goes back to what I asked earlier: what is your understanding of Holy Communion? What is its significance?

As an Anglo-Catholic, I do believe that the elements of the Holy Communion, the bread and the wine, sacramentally become the true Body and Blood of Jesus Christ. The Church since the earliest centuries – even the 1st century, I’d argue – believed this to be true. Of course, I am not talking about the medieval concept of transubstantiation based on the metaphysics of Aristotle. And I’m not even referring to the Lutheran idea of consubstantiation – which, in my opinion, makes more sense than transubstantiation. No, here I stand with the Orthodox Church and Anglo-Catholicism that the Sacrament of Holy Communion is truly the Body and Blood of Christ mysteriously and sacramentally present. Yes, Jesus Christ himself is present with us in Holy Communion. His very presence. That’s something to deeply ponder and for which to be deeply thankful (“eucharist” is Greek for “thanksgiving”).

If that is true, then Holy Communion is a communing not only amongst ourselves, but our communing together is with the Lord himself. Why wouldn’t we do that? How could we not meet together in a worship experience wherein all of Christ’s people worship him and truly meet with him in the Eucharist? What better thing in the world could there be? Of course, this does not negate the preaching of the Word because the words of Scripture are indeed the words of God and Christ. Nevertheless, Jesus does promise his presence in the breaking of bread (Luke 24:30-31)! How can we neglect such power, presence, and grace?!

That’s why we meet together. And, that’s why I can hardly wait and pray for this pandemic and Zoom-era worshipping experience to end!

However, if the bread and wine are merely representational of Jesus’s death, then never mind what I just said.

So, will up to 30% of Protestants per the article not return to in-person church services? I don’t know. I guess it depends on the amount of communion (and Holy Communion?) they experienced at church and how much that fellowship meant to them.