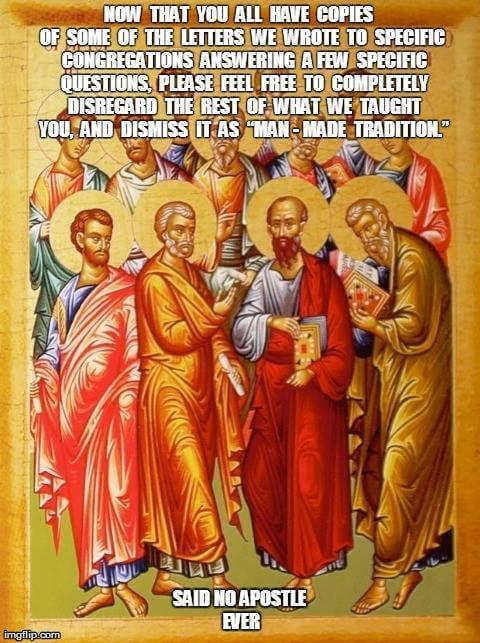 Doctrine. Doctrine. Doctrine. Some folks are so uptight about it, typically resulting in majoring in the minor points that don’t matter – like having a certain eschatology (or, dare I say? the *filioque ) – which always leads to division.

*[In fact, the one true Church has been divided over this one Latin word since 1054 AD. What an enormous shame! And, worse, it’s pride in the guise of “doctrinal purity” that keeps the Church apart.]

Of course, that is not to say that doctrine does not matter. God forbid! Some folks – even in the Church – love this idea though. You can believe whatever suits your fancy and whatever justifies your lifestyle.

No. Doctrine does matter. But don’t take my word for it, take the Apostle Paul’s:

Romans 16:17
“I appeal to you, brothers, to watch out for those who cause divisions and create obstacles contrary to the doctrine that you have been taught; avoid them.”

1 Timothy 1:3
“As I urged you when I was going to Macedonia, remain at Ephesus so that you may charge certain persons not to teach any different doctrine.”

1 Timothy 1:9-11
“…understanding this, that the law is not laid down for the just but for the lawless and disobedient, for the ungodly and sinners, for the unholy and profane, for those who strike their fathers and mothers, for murderers, the sexually immoral, men who practice homosexuality, enslavers, liars, perjurers, and whatever else is contrary to sound doctrine, in accordance with the gospel of the glory of the blessed God with which I have been entrusted.”

1 Timothy 6:3
“If anyone teaches a different doctrine and does not agree with the sound words of our Lord Jesus Christ and the teaching that accords with godliness….”

Regarding the qualifications for a bishop, Paul says in Titus 1:9,
“He must hold firm to the trustworthy word as taught, so that he may be able to give instruction in sound doctrine and also to rebuke those who contradict it.”

To Timothy, Paul writes in Titus 2:1,
But as for you, teach what accords with sound doctrine.

So, there is such a thing as sound doctrine. Right doctrine. Also known as orthodoxy as enshrined in the Bible and handed down (lit. “traditioned”) to us in the historic catholic (i.e., “universal” ) Church. It is the teachings of Christ himself given to his Apostles and passed on to us (more on this below). Does that mean there was some kind of body orthodox teaching from the “get go” of the Church?

Yes. Yes, there was.

Or else, St. Jude makes no sense at all: “Beloved, although I was very eager to write to you about our common salvation, I found it necessary to write appealing to you to contend for the faith that was once for all delivered to the saints” (Jude 3).

Contend for what? A hodge-podge of loose theological ends? No. The Faith. Those core elements – summarized succinctly in the creeds, by the way – that have been part of the Church’s 2,000 year history.

It’s that core that all orthodox Churches believe. There are all sorts of disagreements among orthodox Christians: Baptists, Methodists, Presbyterians, Pentecostals, Roman Catholics, Eastern Orthodox, and, yes, even Anglicans. Nitpicking and arguments and debates and sharp (yet important) disagreements are common place among us. But the majority of Christians in these groups recognize the spiritual family DNA in each other in virtue of our common baptism in the triune God. And, because of that, we all extend the name “Christian” to each other. (Yes, even the Eastern Orthodox Church, the most exclusive of the bunch, I’d say, still does not rebaptize Christians who came from another Christian denomination that affirms this core, that is, “the Faith.”

This is not true of just any group that refers to itself as Christian. There are other groups – many of which did not even come into existence until the 19th century – which, having no regard for the orthodox Faith, made up their own doctrines (or, typically, they are still in the process of making up their doctrines) and rewrote Christian history to suit their quirky, ahistorical claims. While orthodox Christians share a common core that allows them to recognize the same family resemblance despite their many differences, these new-comers – each which (unsurprisingly) claim to represent the earliest, genuine Christianity – do not agree on anything except for the claim that the historic Church is apostate. Wow! (At least, they can rally around something.)

Within orthodox Christianity, nevertheless, some churches pride themselves for not being doctrinaire. It’s not that these churches have a “free for all” attitude. They do maintain a core set of historic Christian beliefs. They would just rather emphasize their ongoing daily relationship with Jesus Christ than get in a hissy fit over the frippery of theological minutia.

Of course, there are others which pride themselves precisely on having the “one, true doctrine” (these churches tend to comprise folks who “have all the answers” and who absolutely dread living with uncertainty).

The “problem” with both these types of believers is that, many times, they don’t know where this right doctrine which they take for granted came from and how they received it. They assume that all these right beliefs that they affirm are conveniently spelled-out in the Bible. The Bible was not, of course, a systematic text book on doctrine. The Old Testament is a narrative of salvation history, and the New Testament primarily comprises occasional letters that addressed certain needs in the early Christian communities. Data for Christian doctrine is there, for sure; but, that data is – and the Bible itself – is read through the lens of the Apostolic Tradition to which the early Church Fathers appealed.

Most modern Protestant believers are wary of the idea that Apostolic Tradition. So what is it?

Apostolic Tradition is nothing other than the deposit of teaching from Jesus Christ entrusted to his Apostles who, in turn, entrusted it to those they appointed (bishops or overseers). These men, whom the Apostles laid their hands on, were tasked by the Apostles to guard and pass on this treasury of teaching to, in, and through the Church, the Body of Christ himself.

In some Christian bodies, unfortunately, the Bible is loosed from this tradition and from the praying Church.  Of these bodies, Anglican theologian, Richard Hooker, wrote:

When they and their Bibles were alone together, what strange fantastical opinion soever at any time entered into their heads, their use was to think the Spirit taught it them.  (Laws, Preface, VIII.7)

Due to heretical doctrines and bad theology, there are certainly limits to spiritual and ecclesial association. But, as James reminds us, what good is right belief if you are willing to rake people across the coals for it. You can have the truth and yet be a nasty person. You can be in error and yet be a lovely person. As Christians, let’s put the positives together and live in such a way that we are both in the truth and loving people at the same time. So, yes, by all (loving, respectful) means, retain doctrinal purity and do not compromise the truth. However, don’t become self-righteous in the process. The idea is to persuade the lost to come to Christ, not repel them.

Or, as Anglican theologian, J.C. Ryle put it:

Doctrine is useless if it is not accompanied by a holy life. It is worse than useless; it does positive harm. Something of ‘the image of Christ’ must be seen and observed by others in our private life, and habits, and character, and doings.