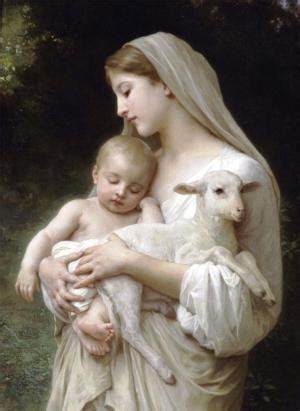 Luke 1:39-45
“In those days Mary arose and went with haste into the hill country, to a town in Judah, and she entered the house of Zechariah and greeted Elizabeth. And when Elizabeth heard the greeting of Mary, the baby leaped in her womb. And Elizabeth was filled with the Holy Spirit, and she exclaimed with a loud cry, ‘Blessed are you among women, and blessed is the fruit of your womb! And why is this granted to me that the mother of my Lord should come to me? For behold, when the sound of your greeting came to my ears, the baby in my womb leaped for joy. And blessed is she who believed that there would be a fulfillment of what was spoken to her from the Lord.’”

Luke 1:48
“For he hath regarded the low estate of his handmaiden: for, behold, from henceforth all generations shall call me blessed.”

Luke 11:27-28
“As [Jesus] said these things, a woman in the crowd raised her voice and said to him, ‘Blessed is the womb that bore you, and the breasts at which you nursed!’ But he said, ‘Blessed rather are those who hear the word of God and keep it!’”

Hail [Rejoice], Mary full of grace, the Lord is with You. Blessed are You among women, Virgin Theotokos, and blessed is the fruit of Your womb, for You have borne the Savior of our souls. – Orthodox Hail Mary

It is truly meet to bless you, O Theotokos, ever-blessed and most pure, and the Mother of our God. More honorable than the Cherubim, and more glorious beyond compare than the Seraphim, without corruption you gave birth to God the Word. True Theotokos we magnify you!
– Hymn to the Theotokos

Why, you might ask, am I writing a post on the Excellencies of Mary, the Mother of Jesus? Well, September 8th is one of her feast days in the life of the catholic Church. Tomorrow is the Feast of the Nativity of the Blessed Virgin Mary (for more history on this and Mary’s ancestry, see here) so what better time!

But why, you might ask, has the ancient Church commemorated Mary at all? And, why does it matter especially in the U.S. where the majority of Christians are Protestant (if not Evangelical)?

The majority of Christians in the world venerate Mary, the All-Holy Theotokos! (All-Holy? Theotokos? – We’ll get to that.) That is, Roman Catholics (1.2 billion), Eastern Orthodox (230-50 million), Oriental Orthodox (60 million), and historic Anglicans (85 million) all venerate the Blessed Virgin. (Note: There are 2.3 billion Christians worldwide as of 2015). But, numbers and percentages do not matter to Protestants; only the Bible matters. So, does the Bible support Marian veneration?

Well, look at the opening Bible verse to this post. Elizabeth certainly honored (i.e., “venerated”) Mary, even calling her “the mother of my Lord” (and for a monotheistic Jew, like St. Elizabeth, you can pretty much translate “kurios” (Greek) or ”adonai” (Hebrew) here as YHWH (the tetragrammaton). Big claim, I know. But, it’s the claim of the catholic Church for the past 2,000 years!

But, humans aren’t the only ones honoring Mary in the Bible. Angels are doing it too! The angel Gabriel says pretty much the same thing as Elizabeth in Luke 1:26-33!

Not so fast! Right?! Doesn’t Jesus himself caution us about venerating his mother? Isn’t that the point of the verses in Luke 11?

Not quite. Tom (N.T.) Wright, in his New Testament commentary Luke for Everyone, states that what the woman in the crowd was exclaiming was something akin to “Oh, to be the mother of such a son!” Well, that’s fine and good. But, what I think Jesus is saying in essence is, “Stop the acclamations! Be responsible for your own standing before God. Anyone who hears the word of God and keeps it is blessed!” And, as we know from St. Elizabeth and from Mary herself, Mary is precisely the one who hears and keeps the word of God par excellence! That is why St. Augustine could say that Mary conceived Christ in her heart before she conceived him in her womb (Discourses, 215, 4).

However, why should a Christian honor Mary? That’s not a trick question. Let me explain to you why I, an Anglo-Catholic and adherent to the historic Anglican Way, venerate the Blessed Virgin Mary.

Besides the fact that the Bible honors her (we just talked about that), first and foremost, I venerate the Mother of Jesus Christ because of the place that God himself has placed her in the story of salvation, aka “the history of salvation.” As St. Paul makes perfectly clear (1 Timothy 2:5), there is only one Mediator between God and humanity, the man Christ Jesus. Nonetheless, Mary mediated the physical presence of Jesus in the world to us. It was Mary’s “Yes” to God and his word to her that allowed the Incarnation to occur in our world for our salvation.

Second, like we just saw, Mary is the Mother of the Incarnation. The Incarnation of what? Of God! Just as St. Elizabeth joyously proclaimed and the Council of Ephesus of 431 exclaimed, Mary is Theotokos (the Mother of God)!1 Theotokos literally means “the one who gave birth to the One who is God.”

Additionally, Mary conceived and gave birth to Jesus as a virgin. That is why in the creeds Christians call her the Virgin Mary. Virgin is a title; it’s a part of her name now. It’s kind of like when we say “Jesus Christ.” The word “Christ” is a title too. It is now a part of Jesus’s name (although, of course, “Christ” is not a proper name). Why is Mary’s (perpetual) virginity so important for a proper, orthodox understanding of Mary? It is important only because of the fact that she is, again, Theotokos. Mary conceived the eternal God in her womb at the Annunciation. As a human – a 100% human – Jesus was born just like the rest of us, through the birth canal of a woman. The tradition of the Church that maintains that Mary remained a virgin in the processes of conception and birth-giving alludes to the fact that this human whom she birthed is also God – again, 100% God. (So, we should also find the birth of God Incarnate to be something of a miracle as well.) Yes, the one divine Person who is Jesus Christ possesses both a complete divine nature and a complete human nature without any mixture or confusion of the two natures. The theological heavy term for this phenomenon is the hypostatic union (or, “personal union”) defined at the Council of Chalcedon in 451.

These two beliefs – or doctrines – about Mary are really the only two dogmas of the ancient Church concerning her. That is, that Mary is Theotokos and that she conceived Jesus as a virgin.

The perpetual virginity, as well as other beliefs about Mary, like her translation into Heaven after her death (you know, like Enoch and Elijah in the Bible), or Dormition, and her being reared in the Jerusalem Temple, belongs to the “inner tradition” of the Church. The perpetual virginity of Mary has very early attestation in the Church – as early as 150 AD. Many of the most important defenders of orthodox Christianity, like St. Athanasius, attest to the “ever-virginity” of Mary. And, of course, the perpetual virginity of Mary was taught by the ecumenical Second Council of Constantinople in 553 2 Anathemas against the “Three Chapters.”

1. If anyone will not confess that the Father, Son and holy Spirit have one nature or substance, that they have one power and authority, that there is a consubstantial Trinity, one Deity to be adored in three subsistences or persons: let him be anathema.

2. There is only one God and Father, from whom all things come, and one Lord, Jesus Christ, through whom all things are, and one holy Spirit, in whom all things are. If anyone will not confess that the Word of God has two nativities, that which is before all ages from the Father, outside time and without a body, and secondly that nativity of these latter days when the Word of God came down from the heavens and was made flesh of holy and glorious Mary, mother of God and ever-virgin, and was born from her: let him be anathema.

, which described her as “ever virgin” (and was expressed also by the Lateran Synod of October 649.) Important Protestant Reformers such as Martin Luther, John Calvin, and Huldrych Zwingli (and the itinerant Anglican preacher, John Wesley) also affirmed the perpetual virginity of Mary.

[Now, if you’re wondering about the “dogma” of the Immaculate Conception of Mary, which is solely a Roman Catholic dogma, it was not promulgated until 1854 by Pope Pius IX. Eastern Christianity and most Protestants see the doctrine as a late doctrinal innovation. It really was not a matter of discussion until the 13th century with theologians of the Church – none less than St. Thomas Aquinas – refuting the doctrine. That Mary lived a sinless life is, in fact, a theologoumenon (a strong theological opinion) affirmed early in the Church by the likes of St. Ephrem the Syrian, but questioned even by the likes of St. John Chrysostom. 3Homilies on the Gospel of John, Homily 21. But, it goes without saying that the Church has believed that Mary was specially prepared to be the Mother of the Messiah. Some Church Fathers believe that Mary was completely purified (think Wesleyan “entire sanctification” here for a Protestant analogy) from sin at the moment of the Annunciation, making Mary the “All-Holy” one, relative to the total and awesome Holiness of God, of course.

“But, wait!” you say. “It is obvious that Mary has been venerated as the first and quintessential disciple of the Lord (Mary was, after all, the first to hear the explicit news and Name of Jesus and to believe in him) and, even, as the Mother of God, but where is all of this validated in the Bible?”

Good question. Remember, all of this stuff about Mary is a part of the Church’s (inner) Tradition. It is not the kerygma, the public preaching of the Gospel of Jesus Christ. It is this Gospel that saves humanity. No tradition about Mary or any of the other saints saves anyone. That doesn’t mean the Tradition about the Blessed Virgin is not true, it just means that Mary doesn’t ultimately save us – even though she is indispensable to salvation history. Indeed, the New Testament is about Jesus, not his Mother (but notice how the New Testament concurs with the two Marian dogmas!).

Nevertheless, as an Anglo-Catholic and orthodox Anglican, I do have a deep love and devotion for Mary. Hopefully, I have adequately explained why in my comments above (even though my comments may have seemed dry and academic). I find solace in that I am not alone in this devotion, but find good company amongst the communion of saints throughout Church history.

Let me end (devotionally) with the earliest extant Christian hymn to Mary dated no later than the 3rd century (that is, the 200’s AD):

Beneath your compassion,
We take refuge, O Theotokos:
do not despise our petitions in time of trouble:
but rescue us from dangers,
only pure, only blessed one.

Oh, and before I forget, “Happy Birthday, Mary!”

“Neither are we unmindful to bless thee, for the most holy, pure, highly blessed, the Mother of God, Mary the eternal Virgin, with all the saints: Recommending ourselves and our whole life to thee, O Lord, our Christ and God: For to thee belongeth, glory, honor, and worship.”